The short review: gleaming, limpid performances of delightful, well-wrought music, in excellent sound. Get it.

Some of you may want to know more than that, so here we go. I’d previously heard Schiavo and Marchegiani’s earlier Decca disc, Schubert for Two; in fact, I reviewed it here. The duo’s playing was exceptional; but Schubert, mostly represented in larger forms, never lets us forget that Music Is Serious Business. Brahms, ordinarily a Very Serious Composer himself, relaxed in these brief pieces: the Hungarian Dance No. 5 used to turn up on the “Pops” circuit; generations of piano students have addressed the gracious A major Waltz.

I’d never previously heard the twenty-one Hungarian Dances in their original, piano four-hands version; inevitably, I compared them to the familiar orchestrations fashioned by various hands, including Dvořák and the composer himself. It’s no surprise that two pianists can be more flexible, and sometimes faster than a full orchestra. The A minor suggests a rushing current, but without actually rushing. Bustling, bounding activity propels the D minor (No. 12), and its “B” section sounds fuller than the more placid orchestral version. The F minor (No. 16) sings formally and sadly, and the “B” section is sprightly – rather like one of Dvořák’s Slavonic Dances, though this isn’t one of the numbers he orchestrated!

But the duettists aren’t all about speed. Number 9, in E minor, is hearty, with a gentle, glowing “B” section. The light textures and teasing manner of the D major (No. 13) are fetching, as are the B minor’s pointed delicacy and sparkling trills. In number 17 – in F-sharp minor, though the booklet misidentifies this and number 5 as in “F-flat minor”! – Schiavo and Marchegiani infect the semitones to evoke a searching, vaguely “advanced” atmosphere. On the down side, the duo’s rubatos in the D-at major and E major dances are distracting, and the tremolos in the D minor (No. 14), tactfully executed, still sound hokey.

Sensibly, Schiavo and Marchegiani play the thirteen brief Waltzes – the shortest runs less than thirty seconds – in three groups, attacca. This avoids short-windedness and provides a sense. or illusion, of arching structure. (The final waltz “plays” as a minor-key complement to the famous A major, immediately preceding.) The duo begin the series assertively, becoming gentler and more reflective as needed, without ever sacrificing tonal fullness. They bring out the irregular scansions of the E major (No. 5) with bright, pingy tone; project simple, spare textures in the B-at and an elegant simplicity in the G major; and bring a lovely uplift to their full-bodied chords in the A minor.

As for the reproduction, I didn’t notice it – the highest compliment I can pay. Bravi tutti. Now, get it. 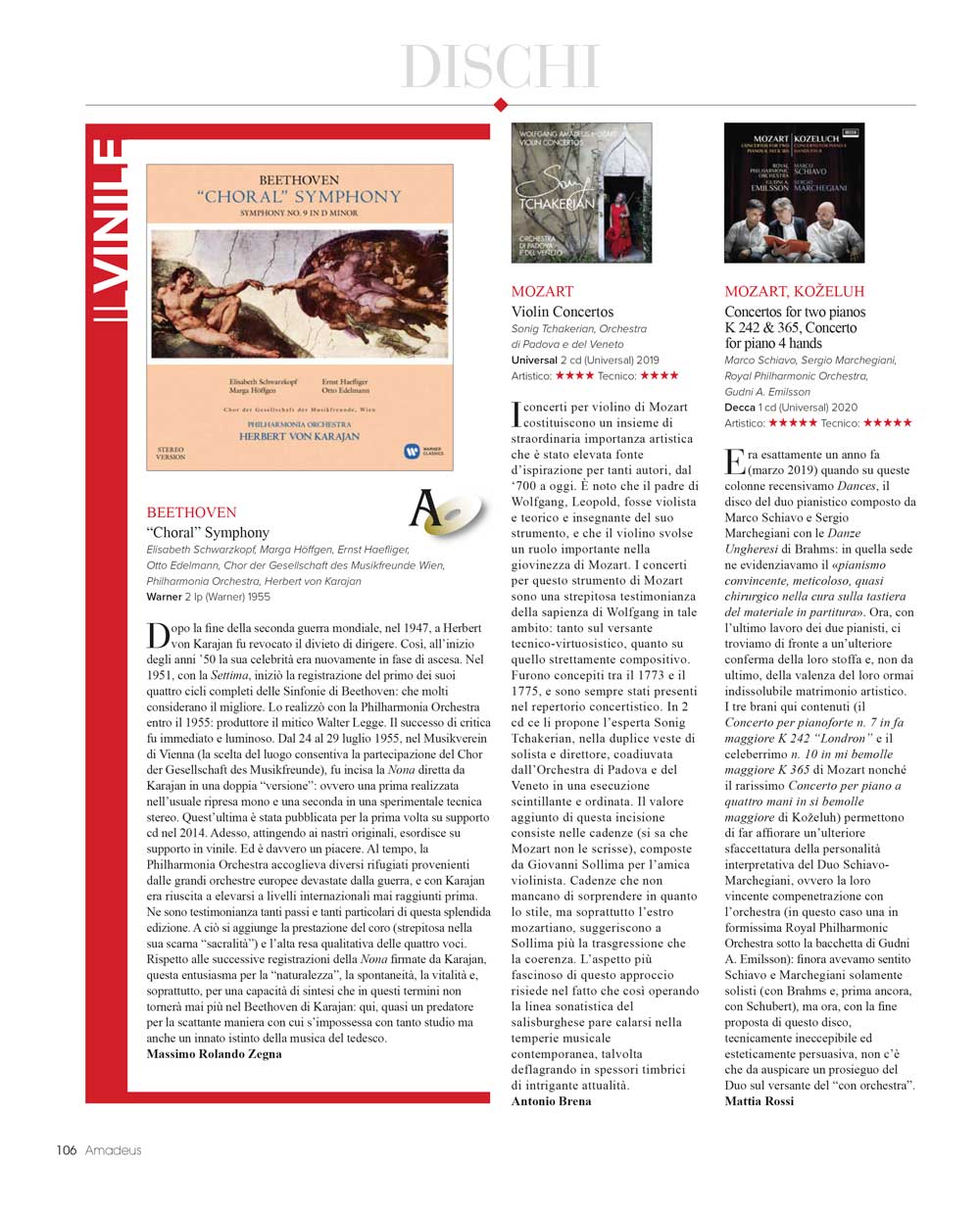 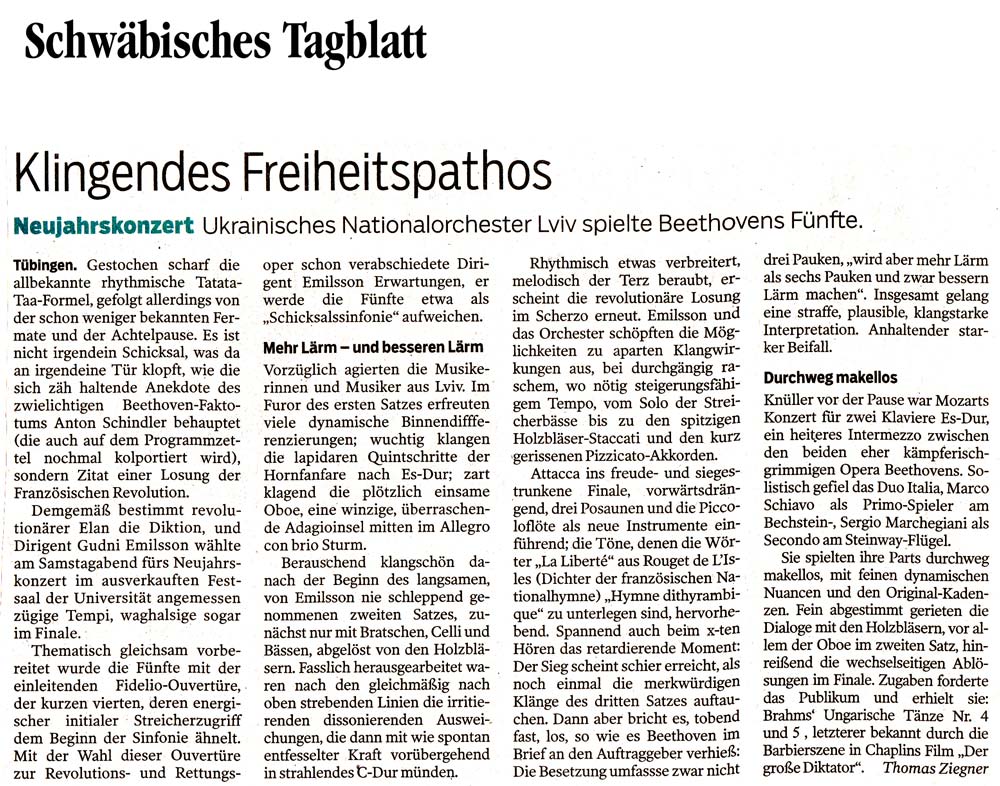 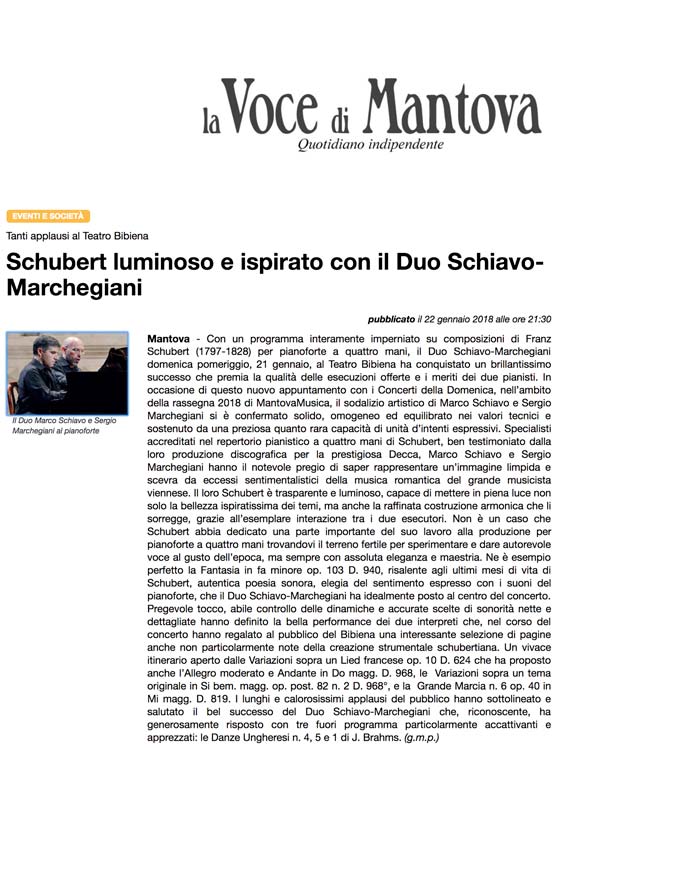 Marco Schiavo and Sergio Marchegiani do a nice job with this music. In the more elaborate pieces, they’re forthright and cleareyed, producing a nice range of tones and textures, and handling transitions with assurance. The lighter pieces – the Ländler and German Dances – are relaxed and lilting…
The recorded sound is vivid and resonant… 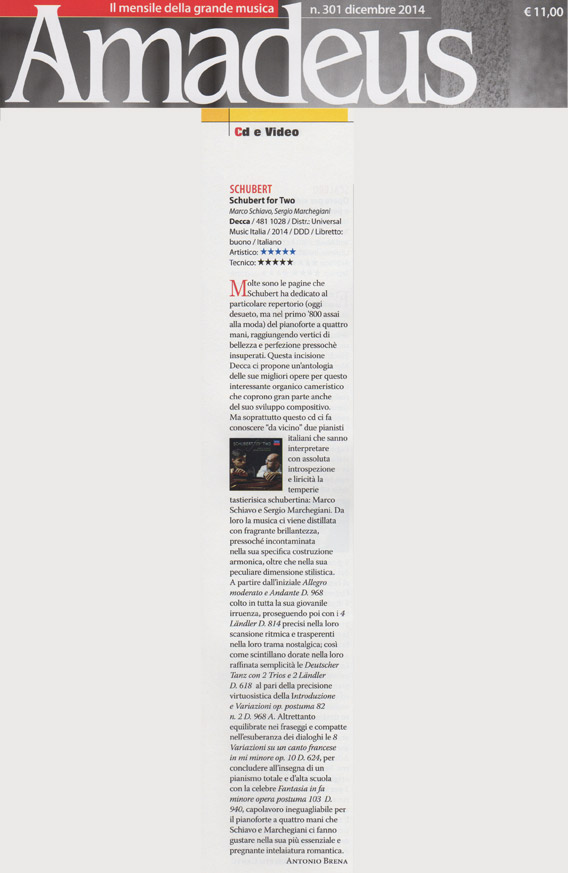 This disc from Italian pianists Marco Schiavo and Sergio Marchegiani surveys Schubert’s writing for piano duet with Allegro moderato and Andante D968, Four Landler, D814, Deutscher Tanz with 2 Trios and Landler D618, Introduction and variations on an Original Theme D9681 (603), Eight Variations on a French Song D624, and Fantasia in F minor D940.
Marco Schiavo studied at the Conservatory of Avellino and made his international debut in 1992. Sergio Marchegiani was born in Alessandria and gave his first solo recital at the age of 10. Here they join forces for Schubert’s music for two pianists at one piano.
Schubert wrote piano duets throughout his life. Partly this was because it was what everyone did, piano duets were part of life and a safe and friendly means of contact.
Making the acquaintance of the pianist Joseph von Gahy in 1817 led to an increase in Schubert’s interest in the genre.
But Schubert’s works for piano duet fall into a variety of characters, there are the social dances of course but also the works in which he seems to be working out interesting structural problems. The piano duet as a crucible for his developing talent. There are also works which seem to have been conceived in a bigger form; a work like Miriam’s Siegesgesang for soprano, choir and piano duet seems to have grown out of his interest in the work of Handel and you can almost hear the orchestral music underneath.
This disc surveys Schubert’s entire output, so the recital starts with his Allegro Moderato and Andante which dates from 1812 when he was fifteen; probably the first two movements of an incomplete sonata. Landler D814 of 1824 were conceived of as dances, not so much to be danced to as listened to and played as a social experience. Next come two sets of Variations on an original theme D968 and the Variations on a French song D624 (1818). Finally there is the great Fantasia dating from the last year of Schubert’s life. Schubert spent two summers (1818 and 1824) teaching the daughters of Count Esterhazy, Marie and Karoline, and the Fantasia is dedicated to Karoline.
In the Fantasia the two pianists play with a lively and easy immediacy, whilst giving a strong sense of clarity to Schubert’s more poetic movements. Their playing has a nice neoclassical feel, this isn’t just Schubert the big soppy romantic, though elements of this are there. There are also plenty of moments, as in Miriam’s Siegesgesang when you can hear Schubert’s interest in Handel other music of an earlier era. The big Fantasia has some lovely poignant moments and his highly evocative.
The remainder of the items on the disc are all admirably played, but I have to confess that they do not hold my attention the way the Fantasia does. The dances are a little bit too dancelike for my taste and the two sets of variations seem to be attractively popular rather than mining the vein of melancholy that the Fantasia does.
But it is clear that in all the items the players seem to be having a great deal of fun, the sets of variations in particular have a lovely verve.
The CD booklet is frustratingly light on information. There is an informative, if flowery, article on Schubert and the music on the disc. But there are no artist biographies and no information as to whether theirs is a regular partnership or one formed for the occasion; both clearly have extensive solo careers. Also, the recording locations elicit some interest, the disc being recorded in Singapore and Kazakhstan.
Quite how you view this disc will depend on how you view the earlier pieces on the disc.

This Is A Custom Widget

This Sliding Bar can be switched on or off in theme options, and can take any widget you throw at it or even fill it with your custom HTML Code. Its perfect for grabbing the attention of your viewers. Choose between 1, 2, 3 or 4 columns, set the background color, widget divider color, activate transparency, a top border or fully disable it on desktop and mobile.

This Is A Custom Widget

This Sliding Bar can be switched on or off in theme options, and can take any widget you throw at it or even fill it with your custom HTML Code. Its perfect for grabbing the attention of your viewers. Choose between 1, 2, 3 or 4 columns, set the background color, widget divider color, activate transparency, a top border or fully disable it on desktop and mobile.
Page load link
Torna in cima